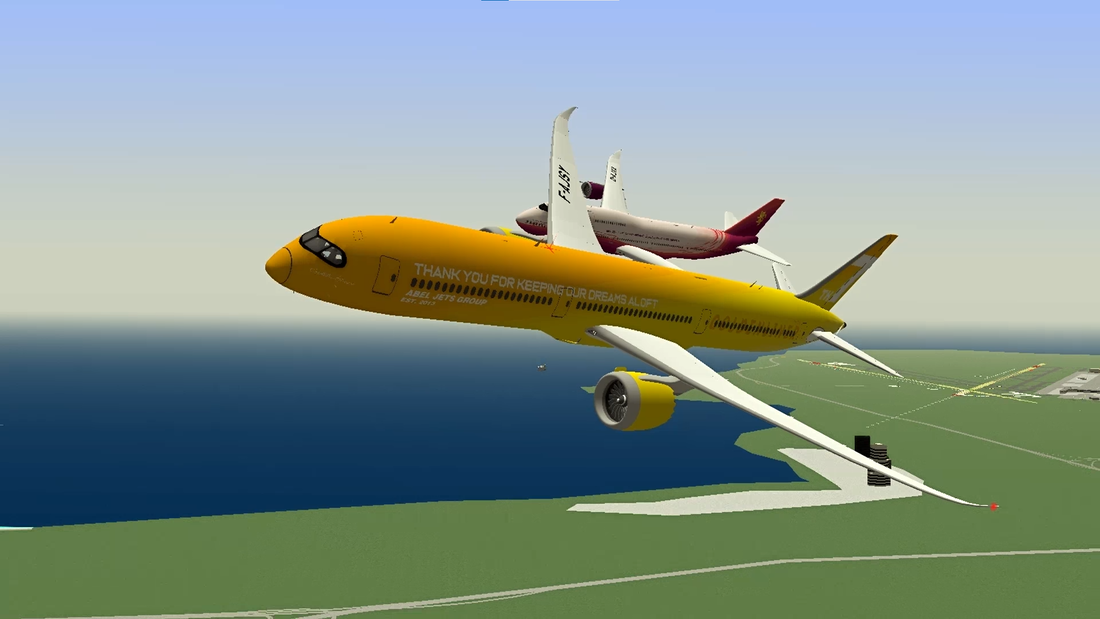 PT Abel Jets Group Sejahtera Tbk. was found in December 2013 under the public brand of "Abel Jets VA" as an LCC (low-cost carrier) virtual airline. The airline initiated as a one-man airline of which its founder and CEO, Faza Abel a.k.a. FreezingFalcon (then known as Abel Flyer), handled all sectors of the airline - from business-related ones up to flight operations. We commenced our earliest flight operations with a fleet of second-hand Boeing 737-400s and ATR-72s - basing them out from Honolulu's Daniel K. Inouye International Airport in Hawaii as the island chain was one of the most profitable staging areas for YSFlight virtual airlines at that time - especially when we noticed the lack of LCC airlines present in the region, a perfect opportunity to make one.

In 2014, the airline expanded its fleet after perceiving that it was profitable enough to do so. We proceeded to dry-lease several airframes of Bombardier (now Mitsubishi) CRJ-900ERs for inter-island operations within the island chain of Hawaii. Following the CRJs were Airbus A320-200s and Airbus A321-200s to reach the furthest islands of the Hawaiian archipelago. The turning point for the virtual airline came when introduced ourselves to YSFlight communities, with the first one being the Indonesia-based YSFlight Indonesia Division (YSF-ID) - with the airline's revenue skyrocketing from the spike of passenger traffic. From that point we were able to dry-lease two Airbus A330-200s and a single Boeing 777-300ER, of which the latter became our flagship at that time, from a Hongkong-based aircraft leasing firm. The three widebody aircraft were utilized to connect Hawaii with mainland United States, gaining massive profit for the airline due to the lucrative routes. Snowball-effect-alike, Abel Jets was able to expand its fleet rapidly following massive growth of passenger traffic as a chain-reaction effect from the airline introducing itself to the international English-speaking YSFlight community, YSFlight Headquarters, or more commonly reffered as YSFHQ. By the end of 2014, the airline operates more than fifty airframes, with high passenger load factor and profit.

In 2015, after seeing a highly-potent market in the fictional Central Mediterranean Islands (CMI) to be utilized as an international hub for business and holiday travelers, Abel Jets Virtual Airline was able to acquire the dying flag carrier airline of the island chain, named AirCMI. With the acquisition of AirCMI, we moved our headquarters to the city of Mandiola in the island of Turbot - part of the CMI island chain. The decision was warmly welcomed by the citizens of the CMI and the creator of the CMI map itself, YSFHQ member Turbofan. In the same year, a decision was made to reform Abel Jets VA from an airline into a air-transportation business group, called Abel Jets Group. This was first revealed to the public by the creation of our website - which has the name of “Abel Jets Group” on it instead of “Abel Jets VA”. Due to the reformation, FreezingFalcon’s position as the CEO was then changed as the president of Abel Jets Group. In the same year, Karl Hellberg a.k.a. ksh joined Abel Jets Group and became the vice president of the business group later on that year. With ksh’s presence in Abel Jets Group, the business group was able to attract many new YSFlight players attention with his marketing strategy and recruited them as pilots for Abel Jets Group’s airlines. During his period in the office, he was the one who insisted the first livery update to Abel Jets Group’s fleet - of which he changed the pattern of the yellow “cheatlines” on the fleet’s aircraft fuselages. Although minor, it was a stepping stone prior to the then-upcoming massive livery refurbishment. Karl stayed in his position of vice president until the middle of year 2015, he had to leave due to personal issues. With the vice president position empty following ksh’s leave from Abel Jets Group, Mark Arkan, of whom was the Chief Pilot of Abel Jets Group, stepped up to the vice president position. During Mark Arkan’s time as the vice president, Abel Jets Group was able to to aid the projects to attract new players to the Indonesian-based YSFlight community YSF-ID. As the year ends, the performance of Abel Jets Group that kept rising and our contribution to the island chain gave us the tagline of “The airline of the CMI” - which was given by CMI citizens.

In 2016, ksh returned from his leave and stepped back up to the vice president position. In the same year, Thomas Siahaan a.k.a. Thomascook221 joined Abel Jets Group as a pilot cadet - of whom later would become the well-known vice president of Abel Jets Group. He then progressively ranked up his position to the first officer rank as time flew by. In late 2016, the first massive livery update of Abel Jets Group was performed, with the jetliner fleet of Abel Jets Virtual Airline within Abel Jets Group itself being split into two divisions - namely Regional and International fleets. In the same year - a milestone within the YSFlight history book was made between Herven and YSBRA virtual airlines - the first airline alliance within the simulation, named “Vingar Alliance” - which means “Wings” in Swedish. This was soon followed up by the creation of “Nation’s Alliance” by Moa Airways, Cal-Air, and E-Fair Airways. After polls that were available to the public were made considerations were taken, Abel Jets Group joined Vingar Alliance on the same year that it was made. The continuous growth of the business group went to a halt when the year was about to end, ksh left Abel Jets Group for the second time - this time again for personal issues with no intent to return in short notice.

Days after 2016 reformed into 2017, Thomascook221 - which was bearing the Captain rank in that time, stepped up as the Vice President of Abel Jets Group due to his outstanding achievement and activity within the airlines of the business group. Although having no prior experience in managing the business sector of a virtual business group, his determination to learn was able to keep him in pace with the competition across the market. Disaster almost struck when in the middle of the year, FreezingFalcon had to take a leave due to academic-related issues for half a year. A meeting was then held and it was decided that Thomascook221 was to step up to the position of the president until FreezingFalcon returns. During this period, the vice president slot was empty with Thomascook221 handling almost all business-related sectors within Abel Jets Group. With his efforts, he was able to keep the group running up to FreezingFalcon’s return later on that year - of which he returned to the vice president position following the founder of Abel Jets Group’s return. The business group then performed the second massive overhaul to its fleet as 2017 was coming to an end - giving birth to the famous Fleet Pack 7.5.

The year 2018 up to 2019 was quite uneventful up to the point where FreezingFalcon took his second leave in the middle of 2019 due to academic matters. During this time, Thomascook221 returned to the president rank that he once assumed but this time with Fikri Kawakibi a.k.a. TheLegend27 and Dr. Simon O. Cohen stepping up to the vice president rank - he was previously in the position of flight operations staff. In this period Abel Jets Group went almost completely dormant, with little-to-no flights performed in online YSFlight servers.

As the decade turns into a new chapter, 2020, the events of the COVID-19 pandemic delayed FreezingFalcon’s return to two months late. But prior to his official return, he had performed a series of discussions with Abel Jets Group’s staff to perform the ultimate fleet overhaul that the virtual business group and online YSFlight communities would have ever seen. Dubbed the Abel Jets Extended Pack project, it was aimed to aggressively expand and completely reinvent the business group. The project was officially commenced in Q2 2020 upon FreezingFalcon’s official return to the president rank of Abel Jets Group. Thomascook221 then returned to the vice president rank, followed by Dr. Simon O. Cohen who reverted himself back as a flight operations staff. Hundreds if not thousands of work hours were performed almost non-stop for almost 24/7, with work shifts made for Abel Jets Group’s modders. There were three main shifts that were created, one from the morning up to the afternoon, followed by the one from dusk up to almost bedtime, and the most dreadful one being from midnight up to sunrise - all were referenced to Western Indonesia Time (WIB/UTC+7). After eight months of hard work and with two of the business group’s modders almost losing their sanity - on the last day of the year 2020, we are more than proud to deliver the product of Abel Jets Extended Pack program - now named as the famous Fleet Pack 8.0. During this development period, Abel Jets Group also acquired Intercontinental Airways Virtual Airline or more popularly referred as IAVA. It was agreed between FreezingFalcon and HawkbitAlpha, of whom is a co-founder of IAVA, that the acquired airline would operate as a primary feeder airline for Abel Jets Group. Taking the so-called “Sunset Two” theme as our new colors, gone are the classic orange-yellow striping liveries of Abel Jets Group as we refreshed ourselves with the new color palette - predominantly consisted of color gradients that could be found in the skies. The business group’s airlines also reinvented themselves into numerous newer airlines such as Abel Jets Platinum, Abel Pixel, AbelJump, Holi-Abel-Day!, Intercontinental Airways, and many more - each are specific to the market they operate in. Abel Jets Virtual Airline itself reformed into Abel Jets MCC (Medium-Cost Carrier) - an upgrade from it being previously operating as an LCC airline. At the end of the year, we also refreshed our slogan to better suit the release of Fleet Pack 8.0 and the future. “Progress to Connect” has been chosen to replace “The Airline of the CMI” as our motto - with the latter one now serving as the tagline for Abel Jets MCC instead of the whole group itself. Why we chose Progress to Connect? This is due to the constantly evolving dynamics of the world of commercial aviation, which provokes us to constantly innovate to stay ahead within the game. We are constantly making progress, to reduce the distance between you and your beloved ones (virtually), by placing girders for worldwide airborne bridges, diversification for extra ranges, all available within your reach. We would also like to connect those, who are cut-off from the rest of the globe to have a method to travel to places they would go to and receive attention from the world, of which they truly deserve.

Now with more than 3,000 registered-airframe within our fleet and counting, Abel Jets Group has become the largest virtual business group in the world that primarily runs in the business sector of air transportation by fleet size. This massive number is something that is humbling to us - as we reflect back to our past when we were a one-man airline. We hope that the story would be inspiring to those who have read to this part - and we hope that we would be able to continue our progress, to connect people across the globe. 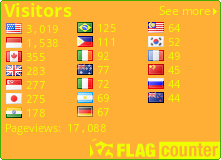